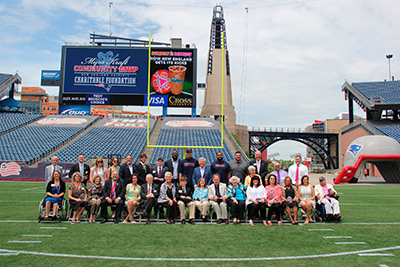 On June 9, twenty-six volunteers were recognized for their contributions at a luncheon and awards ceremony at Gillette Stadium. Each Community MVP received grants for their respective nonprofit organizations. Fifteen New England based organizations were presented with $5,000 grants in honor of their volunteers’ work. Ten others received grants of $10,000 and one grand prize winner was presented $25,000.

“Every year, we ask New England nonprofit organizations to nominate one volunteer who they consider their MVPs,” said Patriots Chairman and CEO Robert Kraft. “This year, we received a record number of nominations from over 400 nonprofits. Their stories are heartwarming and inspirational and narrowing the field to 26 winners gets more difficult every year. As a lifelong volunteer herself, this was always Myra’s favorite event. I am so glad that her legacy continues to live through the great work of all the Myra Kraft Community MVPs.”

Hildy Grossman of Brookline, Mass. was one of fifteen $5,000 third place winners.

“Being selected as a winner of the Myra Kraft Community MVP award is a very moving and meaningful achievement,” said Grossman. “As a lung cancer survivor, I am one of the rare fifteen percent who survive five years. Most people don’t realize that lung cancer is the #1 cancer killer. By receiving this award and the attention that comes with it, Upstage Lung Cancer can make even greater strides to help destigmatize lung cancer and gain more public involvement to raise research funding to invest in early diagnosis and new treatments.”

Following her treatment for lung cancer eight years ago, Grossman turned her experiences and passion for theater into a way of supporting lung cancer research. She has been coordinating productions ever since then and each show Grossman puts together includes an educational component so that attendees learn more about lung cancer. Her efforts have helped raise thousands of dollars for research and spread awareness of the disease to thousands of spectators.

“Upstage Lung Cancer is thrilled that Hildy Grossman, our Founder and Artistic Director, has been chosen as a 2014 Myra Kraft MVP Awardee,” said Crispin Weinberg, Senior Advisor & Director of Upstage Lung Cancer. “We all know Hildy to be an inspirational and tireless volunteer most deserving of this great honor. The MVP award will contribute immeasurably towards our goal of raising awareness and destigmatizing lung cancer. The public recognition will benefit our small, all-volunteer organization and help our cause grow and gain support. But even more importantly, this award will undoubtedly help many people overcome their fear, learn more, and seek treatment. On behalf of the people whose lives you are saving by selecting Hildy Grossman as a Myra Kraft MVP, we thank you from the bottom of our hearts.”

The 2014 MVPs represent all six New England states, a variety of nonprofit organizations and range in ages from 13 to 93 years old. Nominations open each spring and for the most up-to-date information, visit www.patriots.com/community.

Patriots Chairman and CEO Robert Kraft, Patriots Charitable Foundation President Joshua Kraft, and Patriots and Pro Football Hall of Famer Andre Tippett were joined by Patriots quarterback Tom Brady and linebacker Jerod Mayo, and Patriots Alumni and 3-time Super Bowl Champion Joe Andruzzi to celebrate their award on the field of Gillette Stadium. The 26 volunteer winners range from 13 to 93 years old, with one winner from each state in the region. Winning nonprofits provide support for many causes, including military member support, education, victims of domestic violence, healthcare, and health and fitness to name a few.