What if Sherlock Holmes Had Cancer? 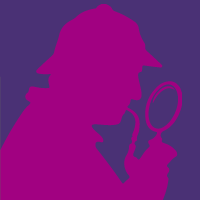 Imagine the scene of a murder. Detectives are called in to figure out how to solve the case. Sherlock Holmes was created by Sir Arthur Canon Doyle. Holmes was the most famous mastermind detective, whose powers of observation led him to uncover clues and evidence that others would miss. Upstage Lung Cancer’s mission is to support research that develops innovative techniques to find lung cancer at the earliest possible time. To date, there are no reliable, easily available and inexpensive ways to do this. We have been supporting a team from MIT’s Koch Institute for Integrative Cancer Research who use state-of-the-art research methods that creatively wed science and engineering to discover the presence of cancer. They use nanotechnology to study in real time tiny nano particles that are one hundred to ten thousand times smaller than human cells. This new method has the potential to detect lung cancer during the earliest stages of progression. What would Sherlock Holmes think? Listen to this fascinating discussion to learn more.

“It’s my business to know what other people don’t know.”